O, Merciful God! Have Mercy On Me The Fallen One!

The guilty pair appear before the great God, whom they have offended; and instead of acknowledging their guilt, they seek to palliate and excuse it. But divine justice pronounces their condemnation, and the sentence will be felt by their posterity, even to the last generation.

The two beings, that had committed the heinous crime, had been enriched with every gift of nature and grace. It was not with them, as it is with us. Concupiscence which gives us an inclination for what is wrong; ignorance and forgetfulness which cloud the intellect of fallen man, these miseries had nothing whatever to do with the fall of our first parents. They sinned through sheer ingratitude. They began by weighing the proposal of revolt, when they ought to have spurned it with indignation and conquered by flight. Then, by degrees, the proposed crime seemed no great harm, because, though God would lose their obedience, they would gain by the disobedience! And at length, the love of God was made to give place to the love of self, and they declared their independence! Yet God had mercy on them, because of their posterity. The angels were all created at one and the same instant, and each of them was subjected to the trial, which was to decide his eternal future. Each angel depended on his own act, on his own choice between fidelity to his Creator and rebellion against Him; so that they who rebelled drew on themselves the eternity of God’s chastisement. The human race, on the contrary, existed not save as represented in its two first parents, and was plunged by and with them into the abyss of God’s reprobation: therefore, God, who spared not the angels, mercifully spared the human race. 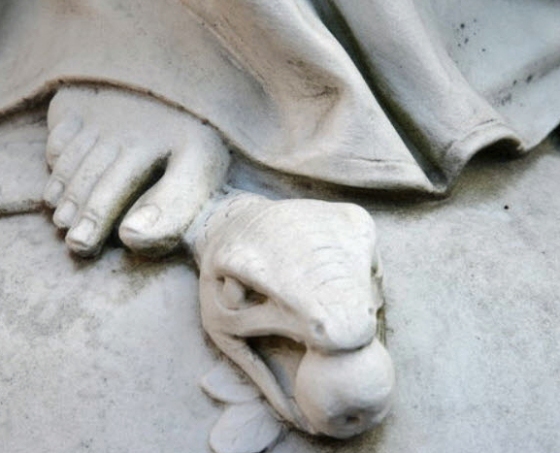 I will put enmities between thee and the Woman; She shall crush thy head.

But let us listen to the three sentences pronounced by God after the fall of man. The first is against the serpent, and is the severest. The curse, which is already upon him, is deepened, and the pardon, which is about to be promised to the human race, is to be given in the form of an anathema against that wicked spirit, that has dared to war with God in the work of His hands. I will put enmities between thee and the woman; she shall crush thy head.’  Thus does God avenge Himself on His enemy. The victory won over the woman is made to turn against the proud conqueror, and become his humiliation and his defeat. In his fiendish craft, he had directed his first attack, not against the man, but against the woman. She, by nature, was weaker and more credulous; and if he conquered her, he hoped-too well, alas! that Adam would be led to turn against his Creator, in order not to displease the creature. All happened as he willed it: but now, see how God uses the woman to foil and punish him. He enkindles in her heart an implacable hatred against His and our enemy. This cruel serpent may raise his proud head, and, here and there, find men that will adore him: the day will come, when a woman’s foot shall crush this head, which refused to bend before God. This daughter of Eve, whom all generations are to call blessed, shall be prefigured by other women: by Debbora, Judith, Esther, and others, all celebrated for their victories over the serpent. She shall be followed, until the end of time, by an uninterrupted succession of Christian virgins and matrons, who, with all their weakness, shall be powerful in co-operating with God’s designs, and, as the apostle says, ‘the unbelieving husband shall be sanctified by the believing wife.’ Thus will God punish the serpent’s pride. Before pronouncing upon our first parents the sentence they have deserved, He promises to bless their posterity, and pours into their own hearts a ray of hope.